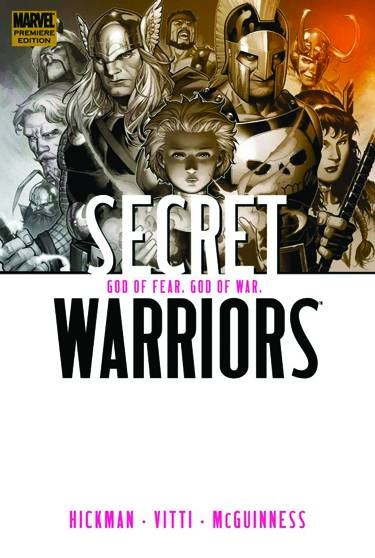 (W) Jonathan Hickman (A) Ed McGuinness, Alessandro Vitti (CA) Jim Cheung. Written by JONATHAN HICKMAN Penciled by ALESSANDRO VITTI & ED MCGUINNESS Cover by JIM CHEUNG Baron Strucker and Norman Osborn team up to drive out the Marvel Universe's ultimate covert superteam. It's wall-to-wall insanity as the Dark Avengers and the Thunderbolts go after the Secret Warriors. It's time for Ares to get his son back! And in THE LIST* Osborn's got it in for Marvel's super spy* but what happens when he needs Nick Fury to uncover a breach in national security? Nothing good* nothing good at all. It's lies* interrogations* double-crosses and just a whole bunch of meanness. Collecting SECRET WARRIORS #7-10 and DARK REIGN: THE LIST - SECRET WARRIORS. 128 PGS./Rated T+ ...$19.99