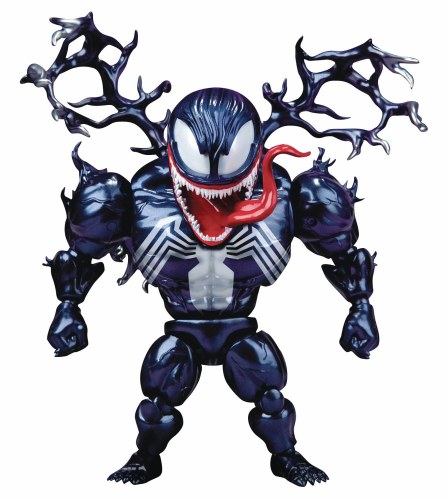 From Beast Kingdom. A PREVIEWS Exclusive! First bursting out of the comic pages in 1984* the exciting anti-hero Venom has been thrilling readers ever since! Classed as a symbiotic alien* this creature needs a host body to fully achieve its goals and to survive. At first a simple* slimy goo* yet once combined with a host* the new form is given ultra-powerful agility and strength! With great power* doesn't always come great responsibility with this alien life-form* instead the host will begin to exhibit signs of instability and ultimately lose their minds! Beast Kingdom is excited to recreate Venom's dark charms and menacing power in a 6" scale! Featuring a faithful recreation of Venom's bulging body* oversized mouth and tongue* as well as his strong fangs* the figure also includes replacement expressions and a movable chin! The set also includes two head sculpts* and as four different sizes of symbiotic special effects goo!