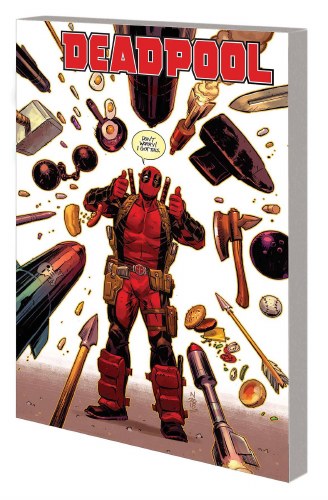 (W) Skottie Young, Dana Schwartz (A) Nic Klein & Various (CA) Nic Klein. War is hell but Hell is worse! First* Deadpool is enlisted to fight in the War of the Realms and sent to Australia to take care of a pesky troll problem! No* not those obnoxious internet nerds real trolls! Will Wade Wilson be big down under? Find out in a tale filled with the sort of carnage only a nation begun as a penal colony can deliver! If the Earth and Deadpool somehow make it through Malekith's war* it'll be time to pay the devil his due. Mephisto and Weasel have their diabolical sights on Wade. Will Good Night finally get his vengeance? And if Deadpool survives* what will be left of him? Plus* unspeakable Acts of Evil will haunt your dreams when the Merc with a Mouth battles Nightmare himself! Collecting DEADPOOL (2018) #13-15 and DEADPOOL ANNUAL (2019) #1. Parental Advisory