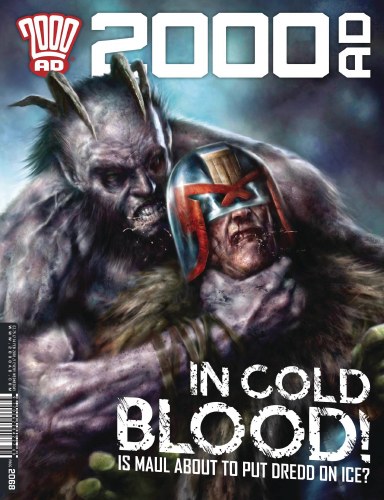 Incredible SF action from the Eisner-nominated UK anthology! The future lawman investigates a case with connections to the dawn of the Judges in "The Paradigm Shift" by Michael Carroll and Jake Lynch; Wulf Sternhammer's son Kenton is finding that being Johnny Alpha's partner can be dangerous to your health in Strontium Dog: The Son by John Wagner and Carlos Ezquerra; Jess is determined to rescue Fairfax from the clutches of Judge Death in Damned: The Fall of Deadworld by Kek-W and Dave Kendall; the dimension-hopping geeks are trapped in the convention from hell in Survival Geeks: Geek-Con by Gordon Rennie* Emma Beeby and Neil Googe; and Nolan Blake plunges deeper into the underworld of The Cube in Skip Tracer: Heavy Hangs the Head by James Peaty and Paul Marshall! Collects issues #2084-2087