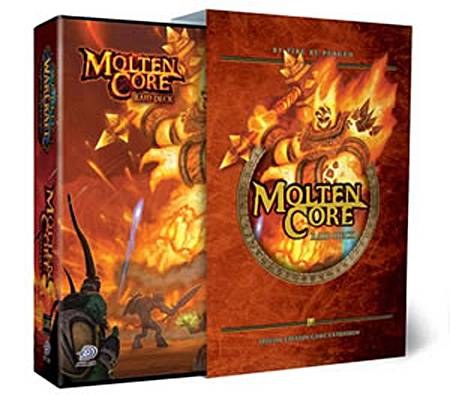 Deep within Blackrock Mountain, amidst the smoldering lava of the Molten Core, sleeps Ragnaros the fire lord. Enter the Molten Core if you dare, but beware the fury of Ragnaros in this limited-edition Raid Deck that opens up a whole new facet of the World of Warcraft TCG. Form a raid party with your friends and try to defeat the deckmaster's ultra-powerful Ragnaros Raid Deck, or play as the powerful fire lord Ragnaros and his minions as you defend your lair from the foolhardy heroes who crave your treasure! This second installment of the Raid Deck expansion set requires players to build their raid parties using cards from the World of Warcraft TCG: Heroes of Azeroth and The Dark Portal sets. 130 cards per deck / six decks per display.