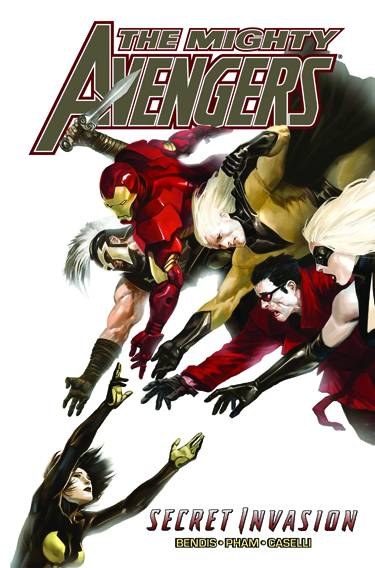 (W) Brian Michael Bendis (A) Stefano Caselli & Various (CA) Marko Djurdjevic. Written by BRIAN MICHAEL BENDIS Penciled by KHOI PHAM, STEFANO CASELLI, CARLOS PAGULAYAN, LEE WEEKS, JIM CHEUNG, ALEX MALEEV & JOHN ROMITA JR. Cover by MARKO DJURDJEVIC Nick Fury is back! As the war with the Skrulls reaches a fever pitch in SECRET INVASION, MIGHTY AVENGERS answers many of the event's most compelling questions: Where is Nick Fury, and what has he been up to? Who are the mysterious 'Caterpillars'? What's keeping the Sentry from taking out the shape-changing aliens single-handedly? And Hank Pym's a Skrull?how the heck did that happen?! Plus: the revelation that Elektra was a Skrull impostor sent shockwaves through the Marvel Universe, and the mistrust that followed tore at the fabric of the Avengers' unity. Now, with the Secret Invasion of the Skrulls in full force, the secrets of her abduction are laid bare! Telling the stories behind the stories that breathless Marvel fans have been waiting for, this oversized hardcover continues to explore the Skrull infiltration and invasion of Earth! Collecting MIGHTY AVENGERS #12-20. 240 PGS./Rated A ?$29.99