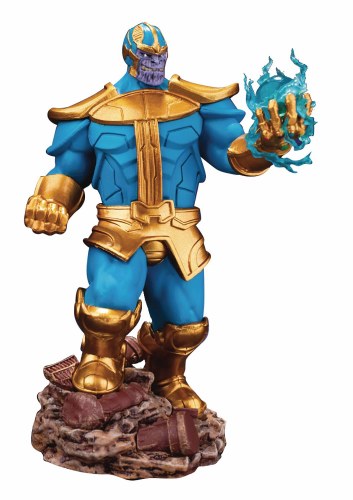 From Beast Kingdom. A PREVIEWS Exclusive! In time for the 10th anniversary of Marvel Studios* Beast Kingdom presents a statue based on retro and classic scenes from Marvel Comics as part of the D-select series of the Exquisite Scenes collection! With his Infinity Gauntlet* the Mad Titan Thanos has the power to decide the fate of the entire universe. Going back to the classics* beast Kingdom gives you the most extreme and savage tyrant of the original comics! With a triumphant look on his wicked face* he has gathered a huge amount of power in his hand just waiting to release it! The special paint and the multi-layered painting technique make the scene and character even more lifelike. This stunning Thanos measures about 6 1/4" tall.